Woodpecker Community Cleanup – it’s not always easy, but it’s worth it

Alain Rozet had wanted to do something about the debris littering his estate for a very long time. But like most people he’d no idea where to start. That is until July 2018, when he received a leaflet inviting him to CleanupUK’s Lewisham Launch event at his local community centre. Our Project Coordinator, Daniella Levene introduced him to other residents looking to make a difference and Woodpecker Community Cleanup was born – with Alain as the driving force.

Alain says, “We started to do litter-picks every month, always on a Saturday because most people are at work during the week. We do it 11 until 12 – it’s the end of the morning when you’re awake and you’ve done what you need to do. It’s worked well so far.”

The Woodpecker Estate has all the hallmarks of deprivation, poverty and anti-social behaviour including, of course, unsightly rubbish. It was one of the estates featured in the documentary ‘Gangland’, notorious as the birthplace of the now disbanded gang the Ghetto Boys. It’s not the easiest place to live perhaps but scratch the surface and you’ll find bucket loads of community spirit just waiting to be channelled.

The first litter-pick coincided with World Cleanup day on the 15th September 2018 and attracted 22 volunteers, including a councillor and the local MP. Since then the numbers have varied between 8-16. The group use WhatsApp to discuss their meetings and Alain found it helps to send reminders beforehand, as well as follow up emails afterwards.

The group usually pick up around 10-12 bags of rubbish a session, as well as larger items like mattresses, armchairs and dangerous litter like needles and tools too. Alain explains, “The council has been very good. They come and collect it all really quickly which is a bonus. They don’t have enough people to do everything themselves but they really appreciate our effort. It’s brilliant.” He adds, “But you need relationships to get help from the council – if you contact them without a relationship nothing will get done. Daniella from CleanupUK set it all up for us.”

Why is litter such a problem on the estate?

Alain believes education is key to preventing rubbish — along with better bins. “My wish for my community is that they get more education about litter, maybe it sounds simplistic, but we need to teach children not to throw it in the streets. Another thing that would help is that there are no lids on the bins, so foxes, and the wind spread litter around — this encourages people to drop more rubbish because they see so much everywhere. Better bins with lids, it a simple thing, but I think it would change a lot.”

“We couldn’t have done it without them. They organised everything, gave us the equipment, always responsive, always supportive. They’re amazing because they help create relationships with councillors and the community. They’re a very important organisation for the country.”

“We all know litter breeds litter, but community action also breeds community action, and there’s been a tremendous knock on effect with others getting in touch who also want to organise cleanups. There’s discussion about further improvements like planting, and the council’s social housing provider is working with the group too.

Meet up: Once a month

Bags of rubbish collected: around 10-12 a month

Alain is passionate about the benefits of litter-picking

“After every session you feel so good. You get to meet people, your neighbours, older people, children and families – that’s the most rewarding thing.  And cleaning the streets makes you feel good too. I feel a stronger connection with the community. I feel part of it. It’s good to get to know people in your block, that’s what litter-picking has brought me.”

After almost a year, Alain handed running the group to Danielle Heath, although he still attends the monthly litter-picks. Danielle’s lived in the area for over a decade and as award-winning community activist she’s used to getting people enthused about local projects. She thinks that coming from Rio, Brazil makes her a bit of an extrovert, “I’m used to getting people together. I was happy to take over the group because this was something we can do. It’s therapeutic. There’s so much rubbish and we are part of the solution.”

Danielle is driven by a desire to build a stronger community

“Some people say to me, ‘why should I do it?’ And I say, ‘why not? I live here. I like to walk about and I like it to be clean.’ I’m a role model. I’m not talking, I’m acting. Being helpful doesn’t cost anything. There are so many cultures and religions living together on the estate but our shared spaces bring us together. It’s our community and we can make it a healthy one. It’s not just cleaning up. It’s building a society of people.”

Danielle is keen to highlight that cleaning up is easy and accessible and that litter is everybody’s problem. She believes educating people, kids in particular, about nature is key. “We need to make people conscious. Change the mentality that makes them throw rubbish. Make the connection early on between litter, plastic and the environment. That it goes hand in hand, so they naturally want to do the right thing and participate in making the world a better place.”

Danielle’s top tip for would be litter-pickers

“Start with the bit that bothers you. The bit that no one clears. Take ownership and be enthusiastic about cleaning up that bit!”

“If you feel like you have too much on your shoulders to organise a litter-pick, then ask for help. When you share tasks it’s much easier. Even a little help is a big help!” 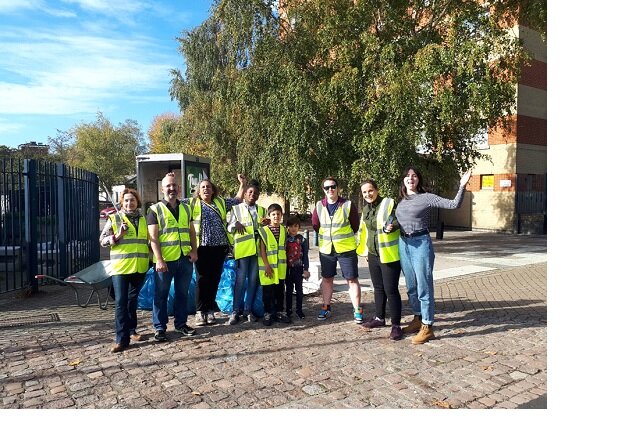