Transforming the Greenway, a runner’s guide to litter-picking

Litter-picking in the Greenway

Catherine lives in the London borough of Newham and is a keen runner. We spoke to her about her interest in running and how it sparked her involvement in litter-picking.

What inspired Catherine to get litter-picking?

Catherine runs along the Greenway, which is a 7-kilometer-long footpath and bike freeway in Newham, London that was built over the great northern outfall sewer. It has always been used for cycling, walking, running and in lockdown, it became a place where people could go and do their hours of exercise. Before the pandemic, Catherine says “the space was relatively quiet, but during lockdowns it got so busy, I sometimes needed to run into the hedges! Green spaces are vital in a City, in the pandemic, suddenly, local spaces became a lifeline and Catherine like many people saw them differently. There’s a stretch of the Greenway near her, and she’d never been so aware of her local area as a place where she can relax.

“The more I became aware of the Greenway and what it has to offer the more I felt that it wasn’t being respected. It’s such an amazing stretch of green, full of wildlife and flowers and it upset me when I saw loads of litter there.”

Catherine decided to take matters into her own hands and wanted to pick some of the litter up as it upset her seeing so much of it. She got herself a litter-pick and went out to do it, and she says it felt great, but she soon realised there was more than she could handle on her own.

Catherine advertised her activities on the Greenway Users’ Facebook page to get more people involved. She received some predictively negative responses,  (it’s the council’s responsibility, why should I pick up other people’s mess ) but also a lot of positive comments. In response, she started her own Greenway litter-picking Facebook page, which meant she was only engaging with people who were interested in getting involved. After gathering some more online momentum,  and support from CleanUp UK and her local council, Catherine arranged her first litter-pick in April 2021 and 12 people attended.

“I didn’t realise just how much effort goes into bringing people together,  you need risk assessments, permissions, and equipment, as well as support from the council to collect bags.  Everyone I contacted was extremely helpful and encouraging. I got in touch with the local resident’s organisation, who were litter-picking on the same day and we managed to bring things together which was nice. It’s been great to have the opportunity to become involved in local residents’ conversations, which I didn’t know about before.”

How has litter-picking benefitted you?

Catherine learned a lot from organising the litter pick. She got a lot of support from people in the running club.

‘Litter-picking is just a brilliant community thing to do, it’s a chance to do something together that is positive, but also to chat and make friends. It can help you make connections with the local community, too.’

Have you found anything strange whilst litter-picking?

When asked about what the strangest thing she had found whilst litter-picking was, Catherine said: “it was a hospital crutch – just lying there in the bushes!” They’ve found a lot of fizzy drinks cans and bottles, but Catherine describes the crutch as the most extraordinary.

What would you say to somebody who is interested in litter-picking but is on the fence about it?

Catherine says she knew that she wanted to do it, and so she got on with it with a lot of support from her husband and friends. So her advice for anyone on the fence is to get friends to help you so that you can do it together and encourage one another.  All you need is a small group of people who will be supportive of you, the encouragement and practical help of an organisation like CleanUp UK, and a good relationship with your local council. 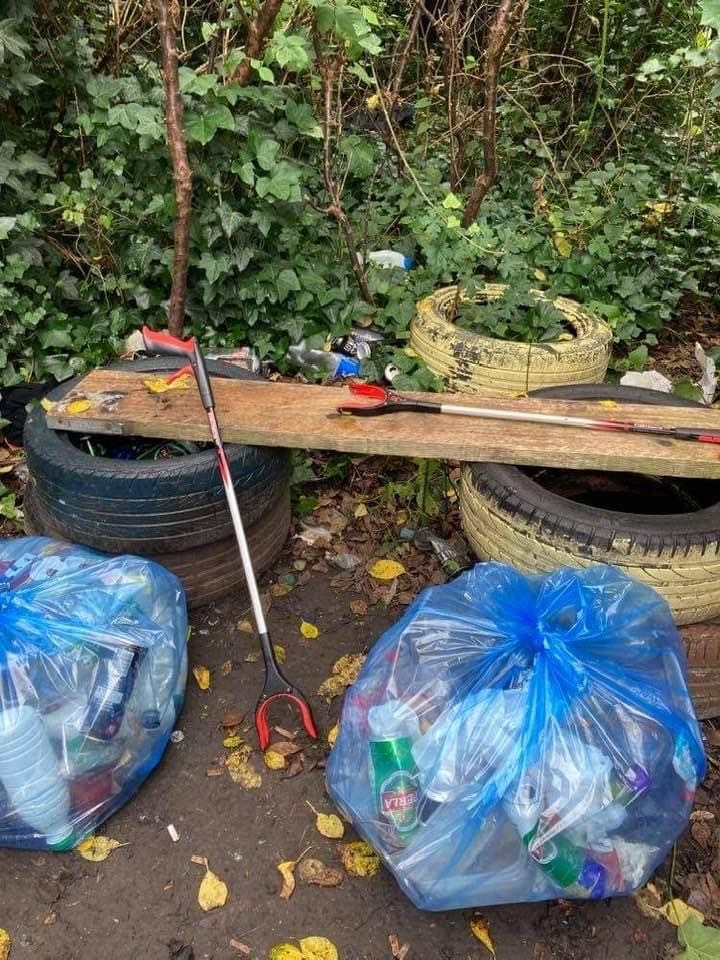