Karen moved to Palmer’s Green in 2017 and works as a personal trainer. A client mentioned that she and some of the women in the local area have set up a Palmer’s Green Action Team. As a local community they were trying to get new businesses into the area because of the empty shops on the high street. They wanted to encourage more people into the area, and a greater variety of businesses so that their bit of the high-street could be a bit nicer by doing things like litter-picking. Karen moved from somewhere not too far away from Palmer’s Green, but they didn’t have any similar local initiatives, and she felt like there was a greater sense of community in her new local area and wanted to get involved.

How long would you say you’ve been involved in local community-building activities?

Karen first started getting involved in 2019, which was also the first time she went litter-picking. She’s noticed the impact that small changes can have on a local area, and has found that their new low-traffic neighbourhoods were great in encouraging more people to stop and chat with one another. “I said hello to a lady gardening outside of her house once, and she invited me to pick some fruit from her trees.” To Karen, the quieter roads have given people the opportunity to stop and chat with people and make new friends, as she doesn’t feel “drowned out by the noise of vehicles every day, which I think helps make connections possible.”

Has litter-picking helped you meet new people in your local area?

Karen thinks that litter-picking has helped connect her to more people in her local area. “I live on quite a long road, and I know my immediate neighbours, but it’s harder to know someone who might live slightly further away. I’ve met all sorts of people from the local area people who don’t live next to me, and I wouldn’t have met otherwise.”

Karen’s local litter-picking group has been going strong for a few years, and with the help of CleanupUK, their first event in 2019 attracted over 100 people on the day. The organisers advertised it locally in a newsletter, and people came to muck in and help pick of cigarette buts and other litter. Karen was taken aback by the number of people who were willing to help

“You think, I’m not going to make much of a difference. But once you know other people are doing it and you can join them, it’s great! You can chat to someone, and it makes a massive difference knowing that other people around, you are feeling the same way as you.”

Karen appreciates the strength in numbers, and “it’s like fly-tipping” she says, “one person might not be able to clear it, but 100 can in almost no time.”

What inspired you to get involved?

The local committee was integral to Karen getting involved in litter-picking. When they’re not litter-picking, they’re planting trees or flowers and it’s a fantastic way to meet other people from the community. Karen says, taking part helps build a sense of pride in your neighbourhood. “I find that I’m constantly looking for things to do, and I feel empowered to do more things knowing that there are more people who will support me.” Now, if Karen has an idea of something that she wants to do, there’s always someone who might want to do it with you.

In May 2019, the group did a big litter-pick and removed stickers from shop windows, and got a grant to put trees outside of shops and tidied up flowerbeds by the library and planted some more flowers. “Once Covid struck, we didn’t do much, but we started up once the lack lockdown lifted. We had about 20 people come down to the high street and tidy up the plants because some had been a bit neglected.” At the end of September, they did a litter-pick in conjunction with the Friends of Broomfield Park, which is nearby, and Karen feels comfort knowing that community groups are still supporting one another in the area.

Would you say you felt a change in your local community since litter-picking?

“I think the more visible you are, the more people want to join in. You can also chat and build up a rapport with local businesses as well.” In Karen’s local area, she’s approached local businesses whose clients litter to see if they can help mitigate some of the behaviour, for example investing in ashtrays outside a barber’s shop. Her approach has been to build connections with people and tell them what the value of not littering could be to their local community, “local businesses want the high-street to look good too.” She thinks encouraging people to try by modeling behaviours is a wonderful way to start as it all has a knock-on effect.

What’s the strangest thing you have discovered whilst litter-picking?

“We were on Green Lanes, which is one of the longest streets in London, and had a number of people doing different community activities on the street. The person working on the flowerbed found a whole host of random objects, like plant pots still in their containers, brand new boxed shoes, and food and drinks, and even a pair of roller-skates.” The group took the roller skates and shoes to the charity shop, and planted the potted plants in the flowerbed they found them in.

If someone were on the fence about litter-picking or getting involved in the community, what would you say to them?

“It’s a nice way to meet new people if nothing else,” says Karen. She believes that litter-picking is also a wonderful way to increase the visibility of local community organisations and individuals. “When people see you out and about, they’re more likely to want to join in, or at least ask about what you’re doing.” To Karen, it’s a great way to meet people, have a chat, get involved in the local community, and get outside for a few hours. Karen’s local group has even gotten some leaflets printed recently to tell people what they’re doing and why it’s important, and have even convinced new local business owners to join in litter-picking. From a business perspective, Karen notes, it’s a great investment as they can help the community whilst also meeting other business owners and potential customers. 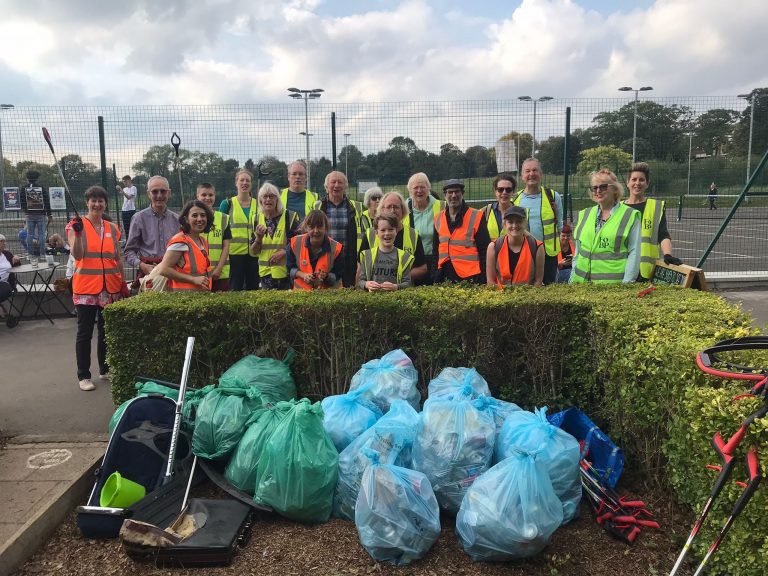 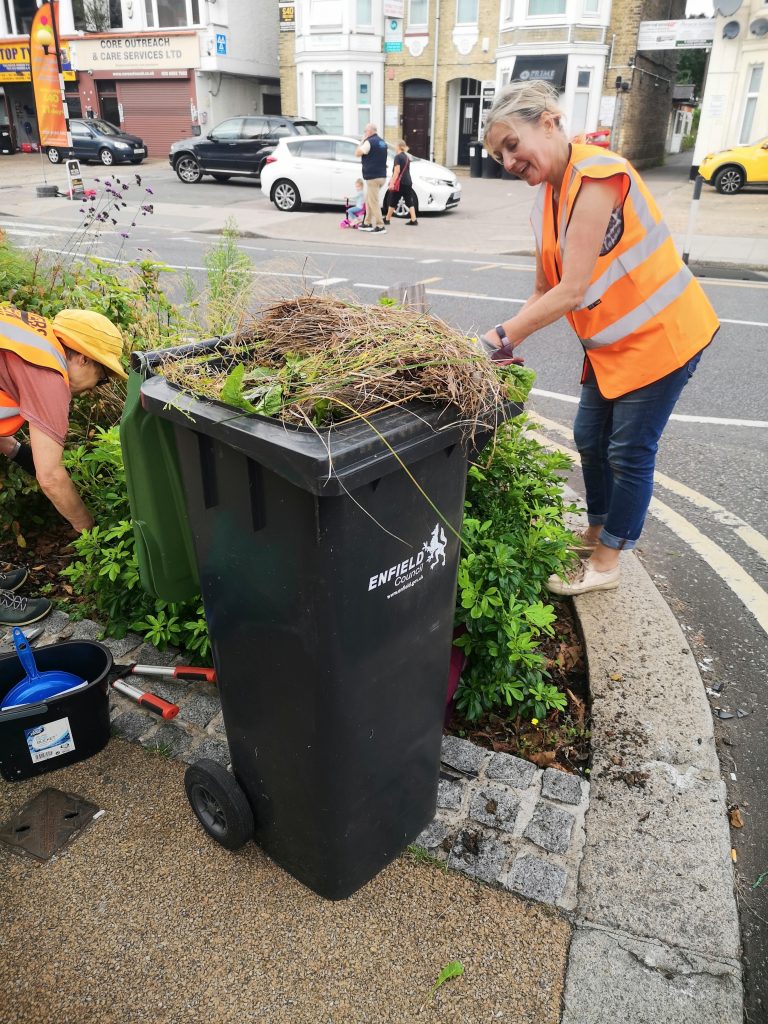 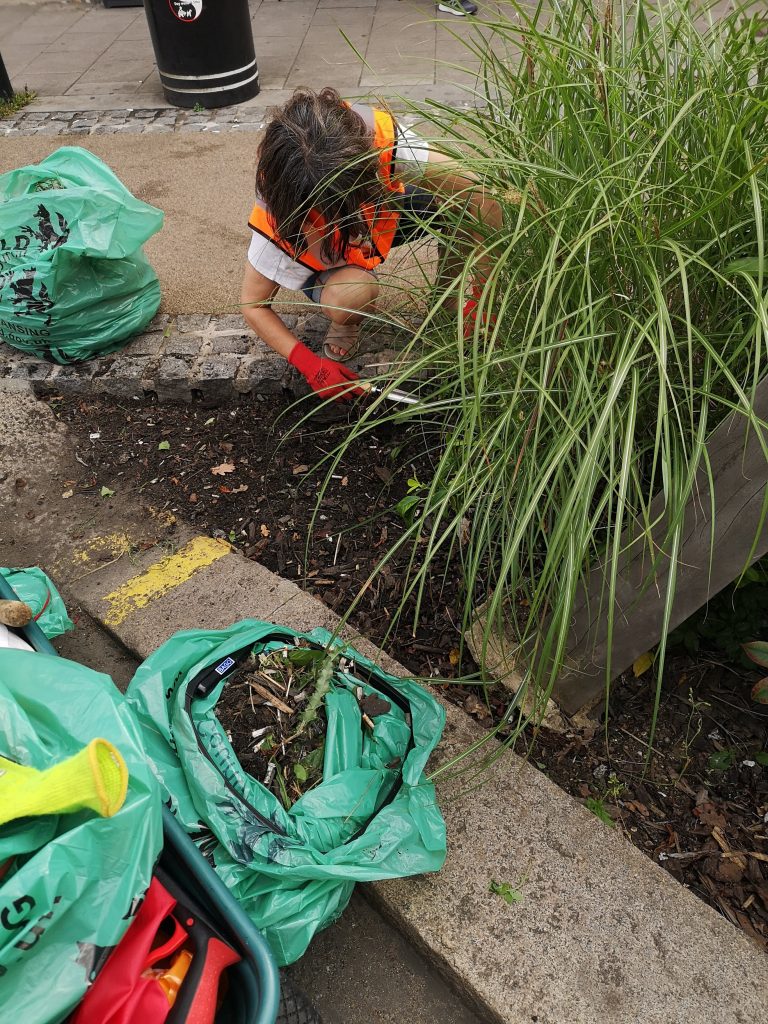