Church Street Triangle is a paved public space flanked by shops and fast food retailers in West Ham, East London. Located beside the beautiful 12th Century All Saints Church and the Densham Greenspace, this historic area is blighted by anti-social behaviour, drinking, drugs and discarded rubbish. An ambitious group of locals is determined to transform it, not only making it cleaner and safer, but also creating a thriving community resource.

After 14 years in Los Angeles, Richard and his American wife Laurie were shocked by the levels of litter around their new home in East London. California leads the way in environmentally-friendly policies – bottle deposit schemes and other green initiatives have meant that most rubbish in the state is recycled.

When the couple moved back to London in 2014, they had no plans to become community activists but soon realised that, if they didn’t want to be surrounded by litter, then it was down to them to do something about it. Richard says, “The American attitude is a lot less cynical than in the UK. It’s more direct. If you don’t like something, you don’t moan about it, you act. That’s what we had to do. I didn’t expect to become so involved,” he admits, “but the result has been very positive.”

To fight back against crime in the area, Richard had already played an active part in setting up a Neighbourhood Watch scheme. The meetings became a springboard for regular litter-picks, which started in September 2016 under the banner ‘Love the Triangle’. “It was very much a group effort. We knew what we wanted to do, but we needed help doing it,” says Richard, “then a local councillor put us in touch with Neeta Kanagaratnam, Project Coordinator at CleanupUK. She’s been very supportive, lending us equipment and helping with advice and contacts. It’s good to know we have her on our side.

The litter-picks happen monthly, with a small, but determined, core of five neighbours: Richard, Laurie, Anya, Keren, Hajni and Diarmuid, taking the lead and clearing several sacks of rubbish every time. Possibly the worst fly-tipping offenders are local businesses, who’ve been known to dump raw meat, which attracts flies and vermin, but the group also pick up cans, bottles and drug paraphernalia. ‘Love the Triangle’ is about making it safer and cleaner, but there’s much more to it than that. The group believe the cleanups set a good example and encourage others to respect their area. And, most importantly, they break down barriers and help build a feeling of community.

Richard’s advice to other people who feel frustrated with similar issues is to “do it, even if you think it’s not for you. When we were new to the area, getting involved helped us to settle in, meet people, feel invested. We do it because we live here, it’s home, and we care.”

And this ambitious group has moved on to events to promote their cause. They held a cake sale over the summer to raise awareness about the litter-picks, as well as money for Macmillan Cancer Support. And in December they’re holding a community Christmas party with cakes, choirs, carols, craft stalls and of course a tree. They’re also aiming to resolve local issues with bins, get new paving, involve the local school in cleanups and even hope to one day use the space for a regular farmers’ market. There’s no doubt they’ve got the ‘can do’ attitude to succeed. 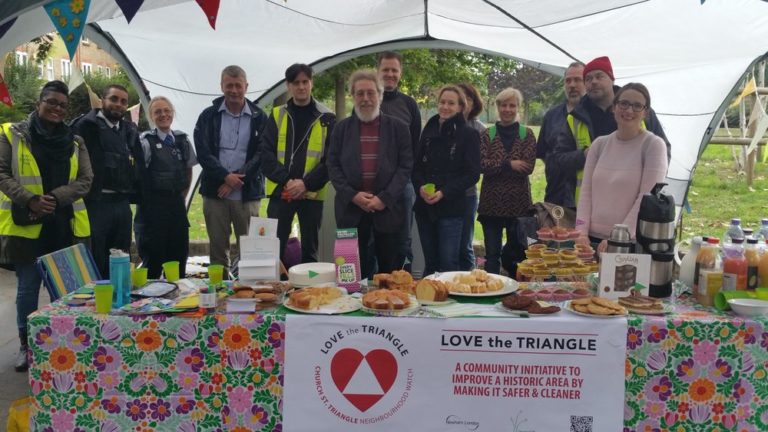